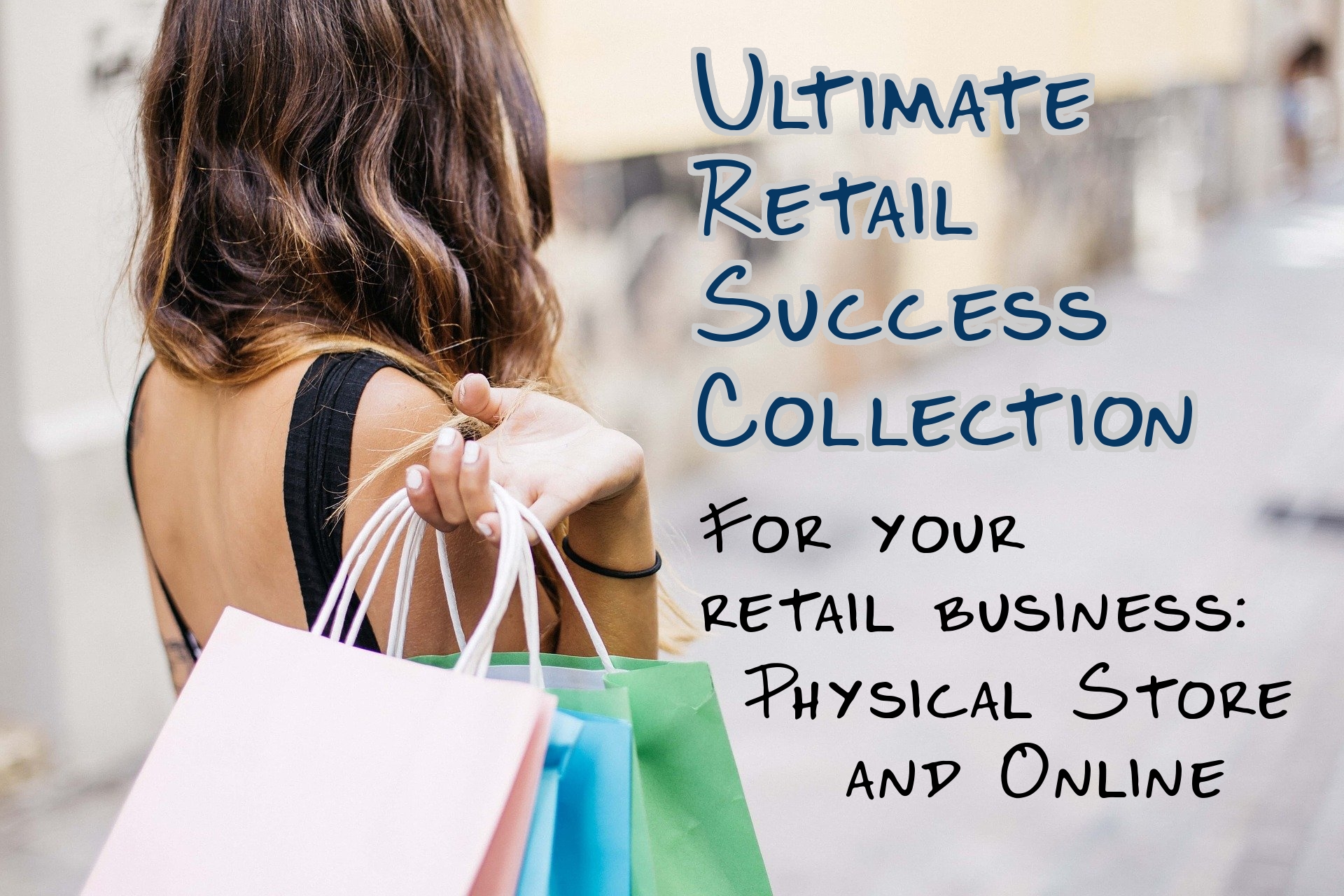 Subscribe to FREE DMSRetail newsletter “RetailWise” and get tips, advice, news and other resources to elevate your retail management practice.

What is this RFID anyway?

“Those who tell you it’s tough at the top have never been at the bottom.”     – Peter Potter

“Things may come to those who wait, but only the things left by those who hustle.”     – Abraham Lincoln

“The true entrepreneur is a doer, not a dreamer.”     – Nolan Bushell

“People may doubt what you say but they believe what you do.”     – Anonymous

“Wisdom is knowing what to do next, skill is knowing how to do it, and virtue is doing it.”     – David Starr Jordan

“The distance doesn’t matter; only the first step is difficult.”     – Mme. Du Deffand

“There’s no scarcity of opportunity to make a living at what you love. There is only a scarcity of resolve to make it happen.”     – Wayne W. Dyer

“Your life is the sum total of all your choices up to this present minute.”     – Brian Tracy

“It is not the strongest of the species that survive, nor the most intelligent, but the one most responsive to change.”     – Charles Darwin

“Performance stands out like a ton of diamonds. Nonperformance can always be explained away.”     – Harold Geneen

“To different minds, the same world is a hell and a heaven.”     – Ralph Waldo Emerson

“Vision without action is a daydream. Action without vision is a nightmare.”     – Japanese Proverb

“Success is neither magical nor mysterious. Success is the natural consequence of consistently applying basic fundamentals.”     – Jim Rohn

“Life is not a matter of holding good cards, but of playing a poor hand well.”     – Robert Louis Stevenson

“If you don’t get what you want, it’s a sign either that you did not seriously want it, or that you tried to bargain over the price.”     – Joseph Rudyard Kipling

“The best way to predict the future is to create it.”     – Peter Drucker

“People often say that motivation doesn’t last. Well, neither does bathing – that’s why we recommend it daily.”     – Zig Ziglar

“The price of education is paid just once. The price of ignorance is paid forever.”     – Anonymous

“Nothing happens until something moves.”     – Albert Einstein

“To reach a great height, a person needs to have a great depth.”     – Anonymous

“Our greatest glory is not in never falling, but in rising every time we fall.”     – Confucius

“Minds are like parachutes – they only function when open.”     – Thomas Dewar

“A smooth sea never made a skillful mariner.”     – English Proverb

“Tomorrow is often the busiest day of the week.”     – Spanish Proverb

“The bad news is time flies. The good news is you’re the pilot.”     – Michael Altshuler

“Plans are only good intentions unless they immediately degenerate into hard work.”      – Peter Drucker

“Nothing will ever be attempted if all possible objections must first be overcome.”     – Samuel Johnson

“What lies behind us and what lies before us are tiny matters compared to what lies within us.”     – Ralph Waldo Emerson

“The man who chases two rabbits catches neither.”     – Confucius

“If your actions inspire others to dream more, learn more, do more and become more, you are a leader.”     – John Quincy Adams

“Winning isn’t everything, it’s the only thing.”     – Vince Lombardi

“Success is not final, failure is not fatal: it is the courage to continue that counts.”     – Winston Churchill

“Your time is precious, so don’t waste it living someone else’s life.”     – Steve Jobs

“Don’t tell me the sky’s the limit when there are footprints on the moon!”     – Unknown

“I’ve missed more than 9,000 shots in my career. I’ve lost almost 300 games. 26 times, I’ve been trusted to take the game winning shot and missed. I’ve failed over and over and over again in my life. And that is why I succeed.”      – Michael Jordan

“The greater the obstacle, the more glory in overcoming it.”      – Moliere

“Become so good that they can’t ignore you”     – Steve Martin

“Ideas are like frog eggs: you’ve got to lay a thousand to hatch one.”      – Peter Drucker

“You are the way you are because that’s the way you want to be. If you really wanted to be different, you would be in the process of changing right now.”     – Fred Smith

“I’ve never been poor, only broke. Being poor is a frame of mind. Being broke is a temporary condition.”      – Mike Todd

“The secret to my success is that I bit off more than I could chew and I chewed as fast as I could.”      – Paul Hogan

“Discontent is the first necessity of progress.”      – Thomas Edison

“If you would not be forgotten, Before you are dead and rotten, Write something worth reading, Or do something worth writing. Lost time is never found again.”     – Ben Franklin

“Learning is not compulsory, but neither is survival.”     – W. Edwards Deming

“There are two types of people in the business community: those who produce results and those who give you reasons why they didn’t.”               – Peter Drucker

“Some of us learn from other people’s mistakes and the rest of us have to be other people.”      – Zig Ziglar

“I had six honest serving men, they taught me all I know, their names were who, and what, and when, and where, and why, and how.”     – Joseph Rudyard Kipling

“Whatever you can do, or dream you can, begin it. Boldness has genius, power and magic in it!”     – Johann Wolfgang von Goethe

“We must take change by the hand or rest assuredly, change will take us by the throat.”  – Winston Churchill

“Successful people recognize crisis as a time for change – from lesser to greater, smaller to bigger.”  – Edwin Louis Cole

“Perfection is not attainable, but if we chase perfection we can catch excellence.” – Vince Lombardi

“I can’t change the direction of the wind, but I can adjust my sails to always reach my destination.” – Jimmy Dean

“Whatever the mind of man can conceive and believe, it can achieve.” – Napoleon Hill

“Twenty years from now you will be more disappointed by the things that you didn’t do than by the ones you did do, so throw off the bowlines, sail away from safe harbor, catch the trade winds in your sails. Explore. Dream. Discover.” – Mark Twain

“Strive not to be a success, but rather to be of value.” – Albert Einstein

“When everything seems to be going against you, remember that the airplane takes off against the wind, not with it.” – Henry Ford

“Don’t judge each day by the harvest you reap but by the seeds that you plant.” – Robert Louis Stevenson

“A person who never made a mistake never tried anything new.” – Albert Einstein

“What’s money? A man is a success if he gets up in the morning and goes to bed at night and in between does what he wants to do.” – Bob Dylan

“When I was 5 years old, my mother always told me that happiness was the key to life. When I went to school, they asked me what I wanted to be when I grew up. I wrote down ‘happy.’ They told me I didn’t understand the assignment, and I told them they didn’t understand life.” – John Lennon

“Control your own destiny or someone else will.” –  Jack Welch

“We’ve learned how to make a living but not a life. We’ve added years to life, not life to years.”     – George Carlin

“In business, words are words; explanations are explanations, promises are promises, but only performance is reality.” – Harold S. Geneen

“Of course you want to be rich and famous. It’s natural. Wealth and fame are what every man desires. The question is: What are you willing to trade for it?”  –  Confucius

“Yesterday is History, And Tomorrow is Future, but Today is a Gift, That’s why they call it the Present!”      – Bill Keane

“Worry is interest paid on trouble before it comes due.”     – William Ralph Inge

“For the past 33 years, I have looked in the mirror every morning and asked myself: ‘If today were the last day of my life, would I want to do what I am about to do today?’” And whenever the answer has been ‘No’ for too many days in a row, I know I need to change something.”      –  Steve Jobs

“With money in your pocket, you are wise and you are handsome and you sing well, too.”     – Proverb

“Your attitude, not your aptitude, will determine your altitude.”     – Zig Ziglar

“The experience of the human race indicates strongly that the only person in abundant supply is the universal incompetent.”     – Peter Drucker

“Worry does not empty tomorrow of its sorrow; it empties today of its strength.”     – Leo Suscaglia

“If you tell the truth, you don’t have to remember anything.”     – Mark Twain

“Be yourself. Everyone else is already taken.”     – Oscar Wilde

“Be who you are and say what you feel because those who mind don’t matter and those who matter don’t mind.”     – Dr. Seuss

“The greatest glory in living lies not in never failing, but in rising every time we fail.”       – Nelson Mandela

“Every adversity, every failure and every heartache carries with it the seed of an equivalent or a greater benefit.”       – Napoleon Hill

“Be a yardstick of quality. Some people aren’t used to an environment where excellence is expected.”     — Steve Jobs